The talented members of Patriot Productions finished their last performance of “Curtains,” the musical-comedy-murder-mystery, this weekend, and it was a sight to behold.

You could really see the amount of work that the entire cast, crew, and orchestra put in over the last few months. Every actor hit their mark perfectly, simultaneously nailing the music and the acting itself. The comedic timing in the musical was amazing – none of the jokes flopped or went over the audience’s heads. Junior Joe Wicke did a great job bringing in the laughs as Lieutenant Cioffi, as well as handling the pressure of being the leading man. Natalie Moradian’s voice was both technically and emotionally strong, especially in her performance of “Thinking of Him.” Her counterpart, Noah Zalika, brought in emotional depth in his song “I Miss the Music.” Paige Wehner did impressively well as the classic red herring, making the audience trust her and distrust her all at once. Nicole LoBocchairo’s dancing and performance as Bambi wowed the audience, and Joe Paderon repeatedly brought down the house as Bobby in one of the funniest performances of the show. Liam Hubbard somehow managed to nail the pretentious English accent as Christopher Bellings, just as Andrew Parisi nailed the New York creep accent. Finally, Piper Doherty’s amazing belt made jaws drop! 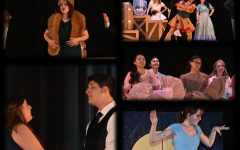 Preview 'Curtains' Before the Curtain Drops!

The props and set added to the quality of the show, as well as the costumes. Even without spoken context, the audience could easily tell what was happening in each scene. None of the plot points fell or became obscured, and the show was all the better for it.

Finally, the orchestra’s performance was outstanding, backing the singers well and adding their own layer of humor. The show was a great way to spend a night laughing!

Last Saturday, at 1pm, the auditorium of Freehold Township filled up with students, families and friends eager to watch the new Spring musical: Curtains. This specific show was for the understudy cast, and to say that they absolutely blew everyone’s minds is truly an understatement.

The show opened with an overture from the school band, directed by Mr. Gattsek. Undoubtedly, the band was prepared, experienced and all worked together nicely in order to create such a grasping opening number.

Soon, the curtain opens to reveal the cast singing “Wide Open Spaces.” Once again, every person on stage seemed to know exactly what they were doing. Not a step seemed to be out of place and everyone seemed genuinely happy to be participating.

Ultimately, this play discusses the story of how star, Jessica Cranshaw (the untalented lead of the musical Robin’ Hood) was murdered on opening night. Lieutenant Frank Cioffi is called to investigate the homicide, considering one of the members of the cast is suspected to have commited the crime. During the investigation, more people end up being murdered, and it is only a matter of time before Cioffi cracks the code and also saves the musical single-handedly.

Each character of this play managed to perfectly portray their character and exhibit their talents. In this play, Daniel Loges who played Frank Cioffi truly had the crowd laughing with his excellent delivery of Cioffi’s jokes and light-hearted personality. Additionally, his performance with Niki Harris, portrayed by Shain Stanley in “A Tough Act to Follow” was undeniably one of the highlights of the show.

It is impossible to ignore the excellent performance by Emily Landolfi, playing Georgia Hendricks. She absolutely blew the cast away with her voice of pure gold and perfection. Noah Zalika, who played Aaron Fox, likewise, left the audience completely in awe with his solo “I Miss the Music.” These two did so well in portraying a truly in love couple, which was refreshing to the rather dark plot.

Furthermore, Bambi and her mother, Carmen played by Sydney Bryant and Gianna Hopper, respectively, left the audience laughing and absolutely entertained whenever they were on stage. Conner Keough, playing the role of Christopher Belling, mastered his British accent perfectly and delivered his jokes immaculately. He truly was this play’s comedic relief.

Though it would be impossible to truly praise every person in this play, it was still important to point out these hard working students and their absolute excellence in this play.

The show closed with the number “A Tough Act to Follow” which included the whole cast. Every single person on that stage was absolutely talented and truly left the crowd speechless and utterly amazed. The ensemble killed it with every dance number they did, and the band was always spot on in playing their music at the right times. Everything truly came together to form one incredible masterpiece. This musical truly showcased how talented the students of Freehold Township are!

Giving a huge congratulations to the cast and crew of Curtains! Here is the understudy cast of the musical. Make sure to congratulate these talented students whenever you see them! Best of luck in future shows!