Patriot Football Secures its First Win of the Season 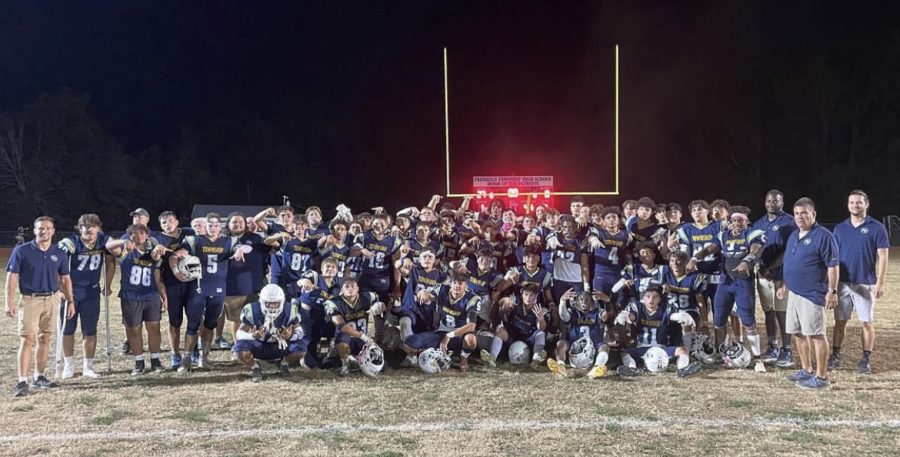 As soon as the calendar turns over to September, the minds of an entire nation shift into one mode: football. For the Freehold Township Patriots, September 1st was no different. Looking to rebound against Barnegat after suffering a tough 31-7 loss at the hands of Manalapan the week prior, the Pats came out swinging. After the Pats’ first possession was deemed unfruitful due to a missed field goal, star quarterback Mark Augello drove down the field again and found Nick Cardone for a touchdown. The Township defense had its time to shine next, with an errant Barnegat snap allowing Cameron Greenberg to easily intercept a pass near the goal line and walk it in for the score. The Pats went into the halftime break with a healthy 14-0 lead, but didn’t stop there. Running back Chase Enlow scored two touchdowns in the second half, one from close range and the other from near the 50-yard line, to give the Patriots a 27-0 lead over the Bengals, one that they would not relinquish. In total, Enlow had 150 yards rushing on 16 carries. His rushing total was the most by a Patriot since 2017, and earned him Constitution Division Sophomore of the Week honors. On the defensive side of the ball, Sebastian Andujar made 8 tackles, with 3 yielding lost yardage, and blocked a punt. Moreover, Nick Benjamino put up 9 tackles including 1 for a loss and Jayden Holmes-Cotter garnered a sack. The game was a brilliant team effort, with all facets of the team getting involved and marking an impact.

It proved to be a perfect night for football. As the sun set on a warm night, the Bleacher Creatures came out in full force, donning Wild West gear and drowning out the Barnegat crowd with their cheers. The Pats’ win made a statement to the Shore Conference, that they could be a force to be reckoned with this season. Township looks to continue its hot streak Saturday, September 10 at noon at Marlboro. If the next game and the games to follow are anything like Thursday night, it is sure to be a memorable season for the Pats.