What Makes a Good Sequel? 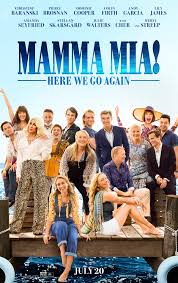 In a day and age where every original movie trope has been used over and over again, it is no shock that so many companies would want to make sequels in order to make even more off of their most profitable films.

Sequels can be considered a controversial thing. I’ve learned that some people can love them more than their original movies, or just hate these attempts for further profit. I had asked a few of my peers their favorite and least favorite sequels. Some of their individual favorites were the movies; Mamma Mia! Here We Go Again, Ted 2, D2: The Mighty Ducks, Captain America: The Winter Soldier, Frozen 2, and Terminator 2: Judgement Day, with more than one person saying theres was Shrek 2, the original Star Wars movie. such as The Empire Strikes Back, the Toy Story sequels, and the original Spider-Man 2, as well as Spider-Man: Far From Home, which is one of my favorites as well. People said they disliked Mask 2, Frozen 2, all the Despicable Me sequels, The Last Jedi, Back to the Future Part II, Cars 2, Thor: The Dark World, Iron Man 2, and We Can Be Heroes, with multiple people saying Mean Girls 2. Personally, I can’t stand Frozen 2, there were way too many plot holes for me to enjoy it. But what makes a sequel good enough to be someone’s favorite?

Personally, I love sequels. As a kid, I remember being extremely eager to watch Cars 2, which one of my peers looks back on and hates. However, recently, I haven’t been as excited to watch the upcoming sequels of 2021. Specifically, after reading a thread about upcoming Disney movies, and when I saw a Tweet talking about Enchanted 2. Enchanted was one of my mom and I’s favorite movies growing up. The original movie follows an unlikely and magical love story, ending with the duo happily married and living a normal life together. I absolutely love the ending and I feel like a sequel, in order to be interesting, would only create marriage problems between the couple. After talking it through with my mother, we decided that the movie could possibly talk about their new family life or their going back into the fairytale world after focusing on the real world for so long. But, I still believe that the movie will reveal that the happily ever ending was not as happy as it was, and for that reason, I’d rather there not be a sequel, as the movie has a perfect ending and I believe it does not need any more added to it.

When having this conversation with my mother, as I would normally be before this, she was very confused as to why I was upset about the creation of a sequel, as she too loved that movie and would love to see Amy Adams play the role again. But, not even a week later, she completely understood. It happened when she and I were watching “Dawson’s Creek” one night when we both laughed hysterically at our favorite character, Pacey Witter, saying to his older brother about his friend, “He’d never speak to me again. I can’t risk that, y’know, he’s the brother I never had.” We kept replaying the clip on Hulu over and over again, so I thought I’d send her the clip on her phone so that we can always have it for a good laugh in the future. That’s when I found out that there was a trailer for a “Dawson’s Creek” movie, coming later this year. Having already watched the show, my mom paused everything and watched the trailer while I did something in another room. I came back to see that she had reacted to the trailer the same way I had to hearing about the Enchanted sequel. She told me that she remembers loving the ending of the show and that revisiting the story so many years later would just ruin all of that for a new, drama-filled plot.

These two instances got me thinking about that question, what makes a sequel good? I think the best sequels are the ones that are based on original movies that do not have a perfectly developed, happily ever after ending. With Cars, the movie was about a racer developing friendships outside of his career and, for the first time, enjoying spending his time not racing. While the movie had a happy ending, it wasn’t this “happily ever after.” There was no perfect ending that people wouldn’t want changed, it was instead vaguely about a racer finally finding his home and true happiness in life. Being a racer, there was room for more racing sequels and even spin offs with the friends he made along the way, such as Motor. Same with Shrek, while Shrek and Fiona got together, this wasn’t their “happily ever after,” even though the movie was based on fairytales. So many friends and villains were introduced that by the end of the movie, there was still so much room to expand their story and drive the two even closer together. “Dawson’s Creek” and Enchanted, on the other hand, are not stories that mainly revolve around a complex story line about friendship and adventure. They instead both focus on the protagonists finding their true love, being the literal theme of “Dawson’s Creek,” seasons three and four. Because both are so fixated on finding this true love and getting to their own “happily ever after” by the conclusion of the show or movie, it would feel wrong to watch a sequel reverse all the history and happiness that got the couples there.

This is exactly what happened with the renewal of the series, “Will and Grace,” one of my personal favorite shows. The show revolved around a friendship between a straight woman, Grace, and a gay man, Will, as they struggled through their careers and relationships with other people. The end of the show was perfect, with everyone finally having their happily ending, getting married, having kids, and yet still being together in the end. But, eleven years later, the show came back and referred to the ending as a fever dream, as the sequel followed the duo struggling to reach this ending that the writers erased, with now the addition of the struggles of their older age and political stances. After watching the sequel series, I feel like the plot was forced and that the original story was fine just on its own, as the new one just tried to reverse this happily ever after that I, and many others, loved dearly, causing the sequel to be cancelled in 2019.

Overall, I think that the key to making a good sequel is only making it for stories that have the opportunity for more. At the end of every Marvel movie, the fans always know that the story is not over yet due to the end credits and constant possibilities for new plots with our favorite heroes, such as Infinity War’s end credits that showed the summoning of Captain Marvel, which inspired her own movie not long after said movie’s release. But, whenever an original movie pushes for this happily ever ending and complete ending, I believe that a sequel is uncalled for.

In summary, I believe a good sequel adds more onto the original movie’s incomplete story, and that sequels are only bad when they try to reverse the original’s happily ever after.