Patriot Productions Present: How to Succeed in Business Without Really Trying 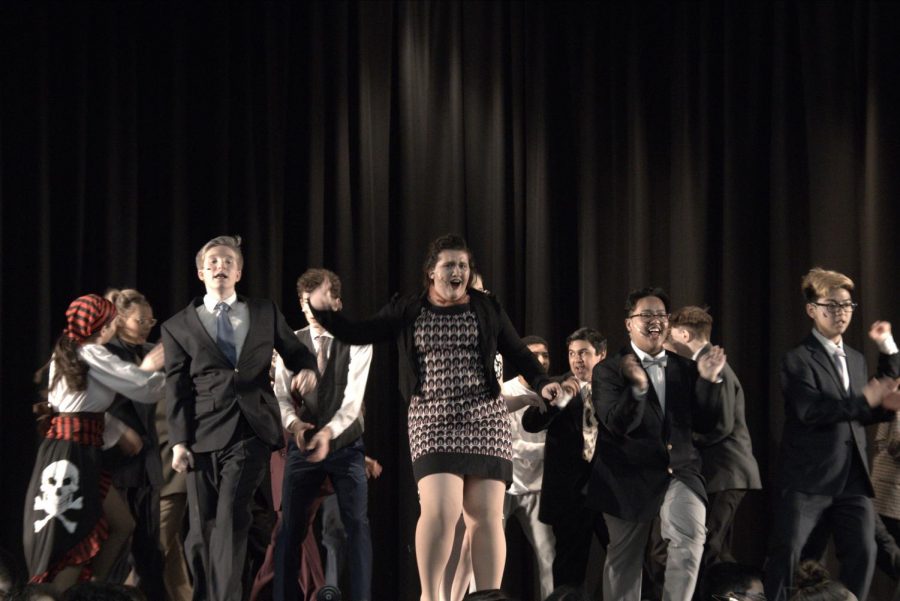 Since late December, the members of Patriot Productions have been tirelessly rehearsing their most recent show, How to Succeed in Business Without Really Trying.  This extremely talented cast has been performing a flawless show every rehearsal up until now, and they are eagerly awaiting their opening night. The show is directed and choreographed by the incredible Mrs. Richardson, with assistance from her amazing co-director, Ms. Cugini. The immensely talented pit orchestra is led by Mr. Gatsek, and the show’s excellent vocals are organized by Mrs. Conners. I am so grateful to be a part of this fun and energetic musical. Furthermore, as a member of the cast, I can truly and honestly express to you all how wonderful this show is! While you wait for the show to open this Friday, I’ve written a synopsis of the show and interviewed a few members of the cast. Additionally, I have provided the full cast list and the dates of the show. I hope you all enjoy it, and make sure to see How to Succeed In Business Without Really Trying on March 5th at 7:00!

Synopsis: Set in 1960s America, the show follows the life of the clever J. Pierrepont Finch as he seeks to “climb the corporate ladder”. Finch uses a small book throughout the show, entitled “How to Succeed in Business Without Really Trying”. He does, of course, as the book implies. In his time at the office, Finch meets a woman named Rosemary who is enamored with him from the moment that they first lock eyes. He also meets the tough boss J.B. Biggley, and Biggley’s entitled niece, Bud Frump. Through drama, relationships, and secrets, Finch attempts to make a name for himself in a company. The show is a fun, comedic, and satirical look at the offices of the 1960s. Will Finch make it to the top of the office? Will Rosemary have her way with Finch? Will there be many more exciting characters and many large and energetic dance numbers? You’ll just have to see the show to find out!

Why should people see this musical?

“People should see this show because there is so much talent involved. “The arts” are so different from sports, and we have all worked so hard.”-Bella Altini (Ensemble)

“People should see this musical because everyone has worked really hard and literally put in their blood, sweat, and tears to make this a good show. People won’t be disappointed!” -Lilia Gerstmeyer (u/s Miss Krumholtz)

What makes this show different from other FTHS shows?

“This show is better than the other because it actually makes sense and it will make you laugh.”- Danny Guilics (Bud Frump)

“This show is different because this year we have a big male ensemble.” -Morgan O’Shea (Miss Jones)

What is your favorite song in the show?

“My favorite song in the show is probably Brotherhood of Man because it really shows how much of a tight knit company we are.” -Nicole Barilla (Rosemary)

“My favorite song is the show is definitely Coffee Break because it is really upbeat and the energy is so high.” -Isabelle Landolfi (Scrubwoman)

What is your favorite part about being a cast member?

“My favorite part about being a cast member is creating a bond with the rest of the cast and making unforgettable memories.”- Olivia Cappello (Hedy)

“My favorite part of being in the cast is the ability to rehearse with all of my friends. I have a blast acting it out with them on stage!” -Amy Alfuso (Miss Krumholtz, u/s Smitty)

“I love being able to work with an amazing pit orchestra and feel like I am actually on Broadway!” -Joe Paderon (u/s J. Pierrepont Finch)