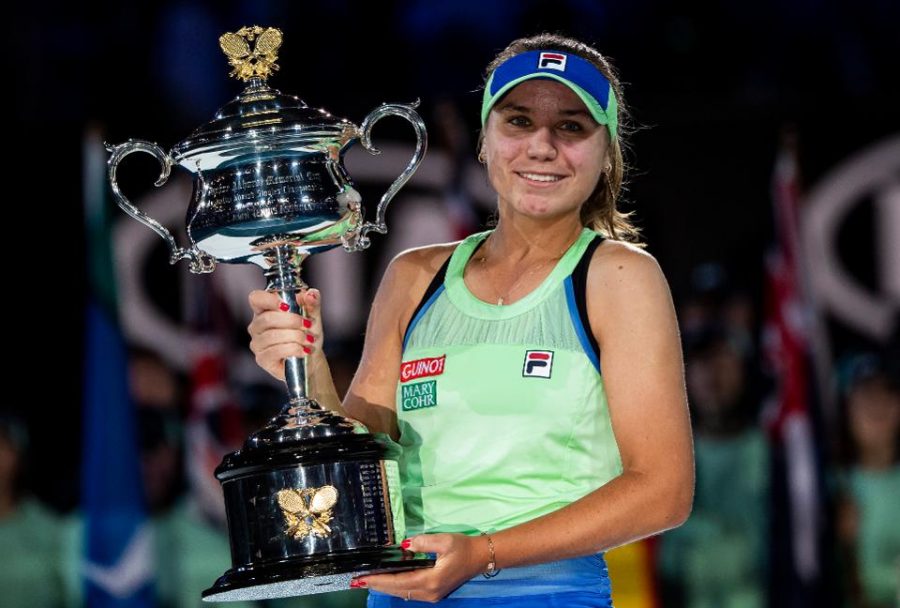 As the resolutions of January set the tone of the year, the Australian Open characterizes the year for tennis. The “Happy Slam,” where players are most ambitious and enthusiastic for the upcoming year, is also where remarkable new players often appear. In the 2020 Australian Open, a fiery American astonished tennis fans all over the world with her incredible run. Sofia Kenin, only twenty-one years old, sparked some fame when defeating Serena Williams in the 2019 French Open. However, in the eight months in between the two majors, Kenin faded from the scene. Once again she fell into the shadow of other American players who are widely recognized for their power hitting. Citing her past results, no one expected Kenin to have such an eye-catching experience, except perhaps her father and Kenin herself.

The most stunning element of the tournament was her intense determination which propelled her though an extremely difficult draw of the tournament. Sofia Kenin, through every match, showed her passionate spirit and never viewed losing the match as an option. Not only is her vibrant mannerism thrilling to watch, but her cunning style of play is absolutely captivating. Kenin never fully relies on her groundstrokes to win a match; instead, she constantly evolves, hitting a multitude of shots in just one point. Primarily, her perseverance throughout her matches is what led her to her first ever Grand Slam Final. Causing a major upset against Ashleigh Barty, the Australian favorite and world number one, Kenin then faced Garbine Muguruza who was eager for the third Grand Slam title.

Although she was on one of the most notable tennis courts, nerves did not dominate Sofia Kenin’s inaugural Grand Slam Final. From the commencement of the match, she showed precision and rarely made unforced errors. In the initial set of the match, Muguruza and Kenin battled for every game, with Muguruza ultimately coming out on top. In the intense, almost an hour long first set, it seemed as though Muguruza had the upper hand due to her experience. She took advantage of Kenin’s serve, which was weak at the start, and dominated prolonged baseline rallies. Succeeding the lengthy set, Sofia Kenin appeared to have fixated on her strategy and truly enkindled her spirit. No one, by the second set, could ignore that Kenin was adamant about becoming victorious in the fierce battle. In her monumental comeback set, she had only dropped two games to Muguruza, which was a stark contrast from the beginning of the match. With the momentum on her side, Kenin swiftly powered through the final set. Even though the zealous match was a remarkable competition between the two athletes, the ending was vastly different. In the final point, the entire crowd sensed Kenin’s anticipation for the trophy and Muguruza’s desperate attempt to grasp onto the remains of the match. Evidently facing the tensions, she double faulted on her serve. Kenin paused at the line call, as if she believed that her incredible success was only a dream. The reality that she had won her first Grand Slam title promptly set in as she dropped her racket and flung her hands to her face. Sofia Kenin, the youngest woman to win a Grand Slam since 2003, stunned not only the crowd but also herself. Clasping onto the glittering trophy, she declared to the crowd and to young players that “dreams come true.”  The young American, by securing the 2020 Australian Open title, demonstrated her unparalleled determination, leaving no questions for her upcoming successes.