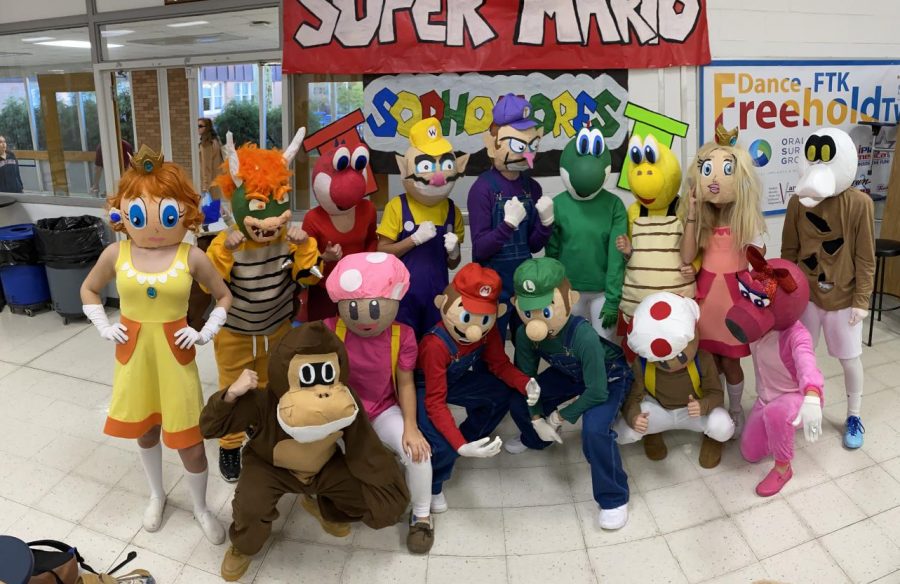 It’s finally that time of year! The most popular school event, BOTC is happening very soon! Each class is very eager to compete and ready to show off the results of their hard work and extensive preparation. Even though the Seniors win this competition most often, every class has high hopes for their placing.

The roster for the sophomores is Kelsey Gilroy, Taylor Stern, Dana Williams, Lila Williams, Emmanuella Halkias, Julianna Marino, Payton Trabb, Herman Colbert, Michael Borromeo, Giancarlo Pantano, Hunter Torre, Aiden Greenberg, Michael Mancusi, Andrew Foti, and Bobby O’Brien. The majority of the sophomore team has already participated in BOTC and can now use this prior experience and team chemistry to their advantage going into this event. These returning players also pulled off an upset last year, with the Freshman team placing third with the sophomores below them. Is it possible that now with even more practice the sophomores could place higher?

The Patriot Press got the opportunity to speak to some of the participants, who are Lila Williams, Bobby O’Brien, Taylor Stern, Michael Mancusi, Payton Trabb, and Aiden Greenberg.

Where do you think you’ll place this year? Do you think it’s possible you could come in first? Why?

Bobby O’Brien: I think the sophomores will finish in a good place this year.

Lila WIlliams: We have put in a lot of effort this year and would love to place high. As sophomores we would have to beat the juniors and seniors, and that is extremely difficult.

Aiden Greenberg: If we do good in the events and the dance goes as planned there is a chance we can get first.

Taylor Stern: Honestly, I am not sure where we will place. Of course everyone wants and is working hard for first. At least, I expect to come in third.

Michael Mancusi: Yes, we have many athletes in the group, speed, and strength, plus our dance

Payton Trabb: It will be very difficult to beat the other three teams, but we will try our best

Do you think your team is now at an advantage since some of you competed together last year? How is your team chemistry?

Lila Williams: After being a member last year I think it odds to our team. The seniors and juniors have an even greater advantage. Our team is very honest with each other and get along well.

Taylor Stern: Our team definitely has an advantage being most of us were on the same team last year. Along with all of us being close friends, I would say our chemistry is great.

Michael Mancusi: Yes because we’ve practiced a lot and built up our chemistry

Payton Trabb: Yes every member adds something to the team skill wise

What event are you looking forward to the most and why?

Bobby O’Brien: I am personally looking forward most to our dance. We worked really hard on it and we think it is really paying off.

Lila Williams: We have put in a lot of time and work into our lip sync dance. I think our whole team is excited to perform it, and have the school see what we worked on.

Aiden Greenberg: The tug of war is always a good one.

Taylor Stern: I’m most looking forward to the lip sync being it’s what we have been mostly focused on.

Michael Mancusi: Dance because we’ve worked so hard on it

Payton Trabb: I am most excited for the dance because we put so much work in and want to show everyone

Bobby O’Brien: This is my first year.

Aiden Greenberg: This is my 2nd year

Taylor Stern: This is my second year

What the best part about being on the Sophomore BOTC team and why?

Bobby O’Brien: The best part about being on the sophomore team is that we all get to hangout, which is going to help us bond for the night of BOTC.

Lila WIlliams: It really is fun being able to compete and work with your friends in such a school wide event and enjoy the time together.

Aiden Greenberg: Hanging with your friends all the time and the memories.

Taylor Stern: It’s a lot of fun and creative stuff. In BOTC you have to think a lot of cool dances, stunts, and costumes in order to win so that’s probably the best part.

Michael Mancusi: To come out of my comfort zone and have fun with my friends