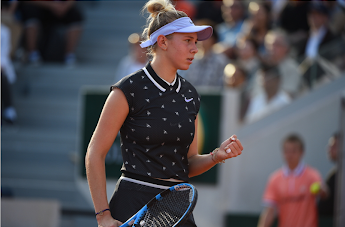 An unmatched intensity can be found on the eye-catching clay courts of Roland Garros.  Just the second Grand Slam of the year, better known as the French Open, is an incredible event which is awaited all year.  The players slide through the chalky surface, battling their opponents and destroying pristine sneakers. The tournament, held in Paris, France, is the only Grand Slam to use clay courts.  Some players dominate in these conditions, while others fail to rise to the occasion.

On the women’s side of the tournament, the returning champions, the favorites, and the expected winners, went out relatively early.  The shocking downfalls left the road to the finals wide open. In the very first round, the seven time Grand Slam champion, Venus Williams, was defeated.  Another surprising loss in the opening round, was Caroline Wasonki, who recently won her first Grand Slam. Naomi Osaka, currently the top ranked player in women’s singles, ended her run in the third round.  Many were shocked by her loss due to her incredible run of winning two Slams in a row. In a stunning upset, Serena Williams also finished in the third round, losing to the young American, Sofia Kenin.

After all of these heartbreaking defeats, the tournament was attainable to many up and coming players.  One particular player, Amanda Anisimova, caught the attention of many. The American seventeen year old reached the semi-finals with her powerful strokes.  The newest tennis sensation beat former number one player, Simona Halep. In addition to the excitement of such a young contender, she was born in Freehold Township.  Beginning her tennis journey at just two years old, it is likely her first time picking up a racket occurred right here at a local court.

Ashleigh Barty and Markéta Vondroušová, the finalists of the 2019 French Open, both faced a Grand Slam for the first time.  The unanticipated competitors for the trophy awed the crowd with their fierce battle for the win. Barty aged twenty-three and therefore the more experienced player, dominated the match.  Barely giving her opponent a chance to steal a game, the match was won in straight sets and took just over an hour. Due to her powerful play, Ashleigh Barty received her highest rank ever, world number two.  On the men’s side, the champion was less of a surprise. Rafeal Nadal, who consistently prevails on the clay courts, beat the young Austrain, Dominci Thiem.

As the French Open reaches the end for 2019, both professionals and student-athletes can be inspired by the performances to move forward with their own career.  Watching first-time and returning champions succeed, tennis players once again find within themselves the drive and the desire to win.