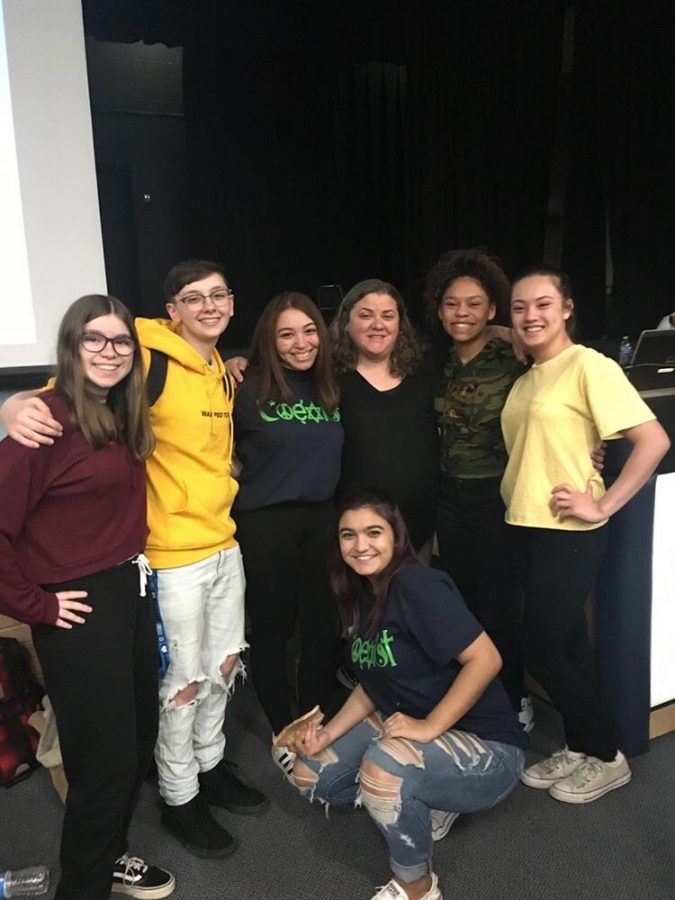 On Thursday, April 4, FTHS hosted its annual Unity Day, led by Nicki Francis of the Wellspring Center for Prevention. Unity Day is an event aimed at addressing the feelings of isolation, loneliness, and insecurity so prevalent among today’s teenagers. The main rule of Unity Day is that “nothing can leave the room”, so students can feel less worried about acting a certain way or saying certain things during the event. Over 85 students, nominated by their teachers, attended Unity Day this year, and they got the chance to learn something about themselves and those around them.

Angel Bradley, a senior who has done Unity Day for all four years of high school, describes the event: “Unity Day is a day to bring peers together and allow a bonding that has always been thought of as “taboo” or “abnormal.” You not only learn more about your fellow classmates, but it’s an opportunity to get in touch with yourself as well. Unity Day for me is a day of freedom and relief. It’s a day when I can finally lift the constant weight off of my shoulders and not feel like a burden for doing so. It’s a day where I can finally realize that I’m not alone because my ‘family’ is going through similar if not the same things as I am. It’s also a day of humbling because you see people through a whole new perspective and for some, it turns past bullying into friendships because you are finally able to see eye to eye with someone you used to declare your enemy. This past April 4th was sadly my last Unity Day at Freehold Township and I will forever be grateful for the lifelong friends I’ve made and the trusted adults I’ve gained through this experience. It may seem scary and uncomfortable at first when all you hear is ‘it’s a day where you cry’ but I can promise it is MUCH more than that. The one day a year has truly shaped who I am today and my entire perspective on the world around me. So, if you are an underclassmen reading this, please try out Unity Day for at least one of your years in high school and you’ll understand why it’s such a powerful day.”

This year’s Unity Day started off by throwing things at people. In the beginning of her presentation, Nikki spoke about comfort zones – how many people miss out on important opportunities because of their fears and anxieties, and why it is important to expand your comfort zone, bit by bit. Then, Nikki called up a student and told her to stand within a square outlined on the floor with tape – her comfort zone. Meanwhile, another student would throw things at her, representing life throwing difficulties and chances your way. When the student was confined to her comfort zone, it was much more difficult for her to catch the objects, than when she was allowed to move freely beyond the limitations.

Next, a fun ice breaker game took place in which the students yelled out their names to be greeted with a wave of applause from everyone around them, energizing the whole room and creating a greater sense of unity among the participants. The students were later asked to fill out a question sheet, having to find a person in the audience with this or that characteristic, like whether they speak another language or have more than three siblings. After getting to know their fellow participants, the students were asked to dance – with a stranger – while standing back to back and locking hands by the elbows. The iconic Unity Day activity proved to be a lot of fun for everyone, as the silly game helped the participating  students loosen up and connect with one another even more.

Afterwards, lunch has arrived – delicious pizza for everyone to enjoy while hanging out with their friends. Suddenly, “Level Up” by Ciara started playing, and some of the kids really went crazy AND stupid, rocking out sick dance moves on the auditorium stage.

Throughout Unity Day, the “I love you” sign in Sign Language is used by participants to support one another.

Break was now over, and the event took on a more serious, solemn tone as Miss Nicky started talking about the many difficulties teenagers face nowadays – things like loneliness and isolation, like bullying and family problems, and the desire many kids have to escape their negative environments, sometimes turning to harmful habits and substances. Nicky talked about the innermost need we all have to socialize and connect with others, and how sometimes it becomes more difficult to find a connection in a world full of technological distractions and social divisions. Speaking about the ever-continuing importance of empathy, Mrs. Francis pointed out how, ultimately, every single human being carries some sort of baggage, some pains and troubles of their own. Keeping this simple truth in mind, it becomes that much easier to understand and connect with those people around you. Nicky then told us her life story, speaking open-heartedly about the joys, trials and tribulations she has gone through – showing by example that all of us can find a connecting point amidst the difficulties life throws at us.

At last, the “Family Group” activity started, in which the students were randomly split into groups where they received a chance to speak about the issues they are facing or have faced in their lives. In this event, many people will experience strong emotions or even cry – but at the end, most say that they felt better than they did before; they say a weight was lifted of their chest. The final activity of the day was “Cross the Line”. During this activity, Nicky reads out certain statements about serious issues many people have faced in their life. If the statement applies to someone, they are supposed to cross the tape line on the floor of the stage.

Ultimately, the 2019 Unity Day was an enormous success, and the people who attended the event later commented on how this single day has helped them grow as a person and learn more about human interaction and connection with others. Unity Day is an immensely important day hosted by our school, with the potential to change its participants’ lives and mindsets for the better. As Nicky Francis returns to FTHS again and again, students will continue learning the momentous significance of understanding and empathy, as well as love towards ourselves and those around us.

“It was a life changing day that puts everyone into perspective” – Kayla Davis, sophomore

“I love how Unity Day gives me the opportunity to understand myself and others more. I was able to interact and connect with people I normally wouldn’t talk to before Unity Day. I’m so grateful that we are given a day to self-reflect and discuss our emotions freely as school and life can get very stressful. I love it so much!!!” – Sam Segal, junior

“Honestly I didn’t know what Unity Day was, as I am new to the school. However, after participating in Unity Day, I realized the great opportunities it provides to student. In the modern society, teenagers have it harder than ever in terms of balancing their school work with other things going on in their life, and during this, mental and emotional health often goes unnoticed. But Unity Day helped me realize how important they both are and how it’s important to healthily cope with my emotions. It also provided me a day filled with activities that helped  me meet new people, and I believe it’s an extremely valuable experience for any FTHS student” – Isar Doshi, junior

A special thank you to Mr. Hipsley and Mrs. Ansley of the Human Relations Commission Club for organizing Unity Day and Pride Week as a whole!