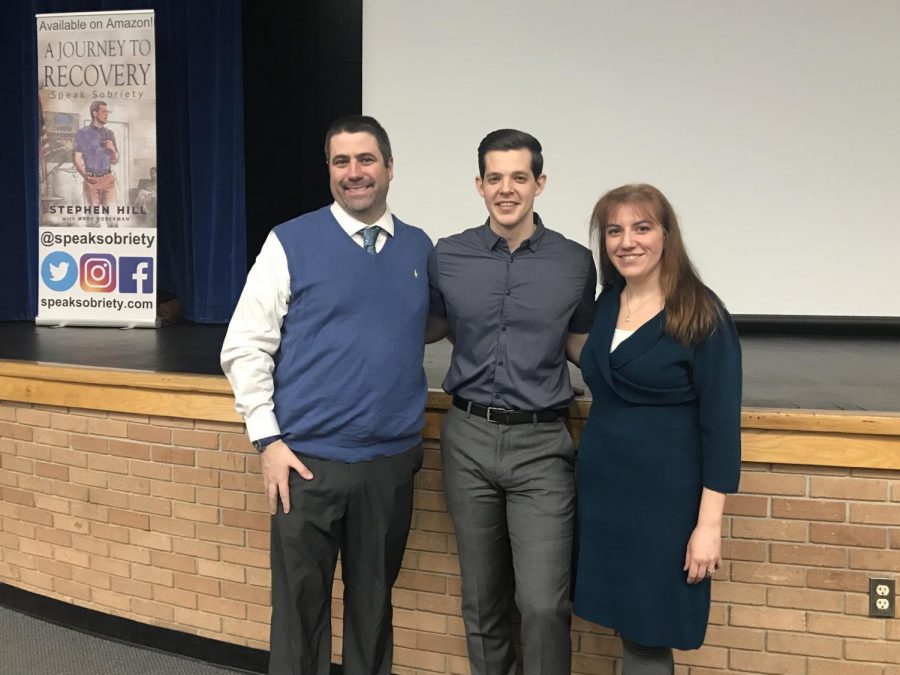 Stephen Hill created Speak Sobriety in hopes of showing the reality of substance abuse to teenagers and students in over hundreds of schools. He was invited to Freehold Township High School to share his story with the juniors, and his moving words will not be forgotten. After suffering from heroin and opioid addiction for over a decade, Hill has been sober for six years and even wrote his own book: A Journey to Recovery.

Hill started by diving into what addiction really is. He defined addiction as “a fatal progressive illness” that can turn any person into someone they are not. Addiction and substance abuse are often associated with mental illnesses such as depression, and people use drugs and alcohol as an escape from their problems. Hill explained that addiction is different for everyone, but in his case, he was “born with the disease of addiction.” In other words, there was no traumatic incident that led him to substance abuse, but addiction was just a part of him.

As a child, Hill had good grades, played sports, and had a healthy family life until high school. He was first exposed to drugs and alcohol in the eighth grade and started using them in high school. The chain reaction started when he sold Marijuana for a senior when he was only fourteen. This led to him smoking weed and trying hard drugs such as cocaine and xanax. His entire life, behavior, and motives were changing very quickly. He started getting in trouble at school and he was kicked off of the hockey team his junior year. Sports were his positive outlet, and after not being able to participate, he refrained from going to school and eventually dropped out at sixteen. After being put into a wilderness program, he was given a second chance at getting his high school diploma; however, he was still heavily addicted to drugs. Even though he barely graduated, he started struggling with addiction to oxycodone and other opioids. He believes drugs and alcohol got in the way of his success and drove him to make poor decisions.

At eighteen, Hill was arrested for the first time for possession of marijuana, and he continued to get charged and arrested. His addiction for narcotics grew after a four wheeler accident. He was given painkillers for his femur injury, and when the doctors stopped giving them to him, he got dopesick. He needed narcotics so desperately, that it turned into a “900 mg a day habit.” Hill explains, “you don’t think about the consequences, only your next high.” His family ultimately kicked him out and told him not to come back until he received help. He lost all of his friends and was left with nothing but drugs and his addiction. On Christmas Eve of 2011, Hill was arrested and charged at the felony level, but it still was not enough to turn his life around.

It was not until he was finally sent to his last treatment program at Turning Point in New Haven, CT that he was finally able to properly begin his recovery. By month five or six, drugs were finally not the first thing on his mind when he woke up in the morning. He started slowly getting his life together by eating healthy, going to the gym, and attending counseling. Hill recovered so well at the program that he would no longer have jail time in New York or New Jersey.

When he completed the program, Hill was offered a full-time career working at the recovery place. After being given a second chance, he was able to go to college and share his story of recovery as a speaker. He is now attending his fourth semester at Brooklyn Law School. Hill’s story is a deep matter, but he hopes that sharing it will inspire teenagers and help others struggling with addiction.

His story resonated with the audience.  “Unlike most drug oriented assemblies, the speaker did a great job being realistic rather than hearing the same thing students usually hear,” said Amanda Cilone.  “I was actually captivated by his story and it allowed me to think about some of the students who could relate to him in some way.”

Christopher Galiano agreed. “The speaker took a topic we, as students, have been lectured about for years and made it entertaining and interesting. Hearing the message against drugs and alcohol from the perspective of stories from someone who has experienced the consequences of those actions really changes how I view things.”

Find out more about Stephen Hill at https://speaksobriety.com/