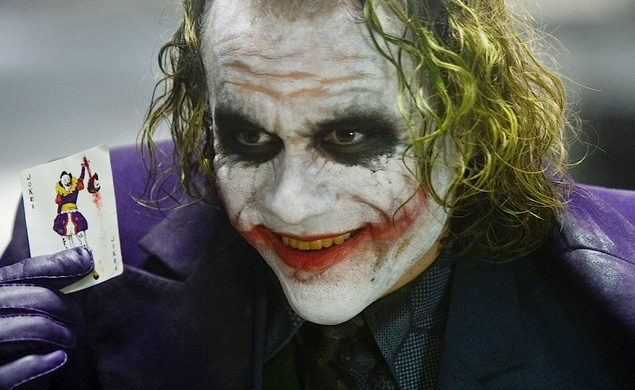 Heath Ledger as the Joker in 'The Dark Knight'

Aristotle once stated that the secret to moving the passions in others is to be moved by oneself, in which such a surreal experience is only made possible by displaying the transformational ascension from experiences that are no longer present. This brief and illuminating thought, while profound in its meaning, has sparked a line of proponents and disparagers alike. While some practitioners of the craft indulge in it, others denounce it as a self indulgent tool for appreciation by critics.  However, regardless of an artist’s decision to renounce or endorse it, the school of drama known as method acting has endured the fluctuating climate of the entertainment industry and has allowed for the creation of trailblazing tales of human capacity and self reliance. With remarkable accounts of actors enduring self imposed isolation and the consumption of raw bison liver, many have adopted this unconventional acting method pioneered during the early 20th century. The question that remains to be addressed, however, is to what extent is method acting is a valid practice, and if it is no longer such, should it be condemned for the toll it takes on an actor’s mental and physical well-being?

The range of training and rehearsal techniques known as method acting derives its foundation from a comprehensive system used to train actors in Soviet Russia during the golden age of theatrics and drama, and was created by theatre practitioner Konstantin Stanislavski. Essentially, the framework provided the means for actors to subjugate themselves to a rigorous process of self-analysis and artistic liberation, in which they learned to evoke realism from their characters using their imagination.

Cultivated as the “art of experiencing,” Stanislavski’s teachings were often expressed as the only form of acting that could dominate the cinema of the East and the West, serving as a “common sense” method of subconscious reference for an actor. This system was only later interpreted and added to by American actor and director Lee Strasberg in the 1970’s, after which he departed from the silver screen to open the acclaimed Lee Strasberg Theatre and Film Institute at New York University with his wife, Anna. Considered the “father of method acting,” Strasberg conclusively declared the following regarding his principles: “method acting is what all actors have always done whenever they acted well.” Consequently, many method actors have taken Strasberg’s words to an extreme, pushing themselves to incredible, and sometimes hazardous feats to conceive performances that are able to express the layers of their character.

The task of portraying the various shades that encompass a character isn’t easy, and the road to winning the golden knight is often onerous to achieve, let alone obtaining a nomination. However, an analysis of best actor recipients from the Academy may prove otherwise. According to Vox, since 1951, there have been 132 best actor and actress awards. 59 of those recipients have been actors with some form of training in method acting, and 33 of these Oscars have gone to actors who intensively utilized method acting to prepare for their roles. With factors such as screen presence, direction, commercial appeal, and strong writing affecting the impact of a performance, Stanislavski and Strasberg’s dynamic approach to the craft has ensured that the numbers are on their side. More specifically, their emphasis on the complete inhabitance of a character has created veterans in the film industry long before their prime, regardless of  nominations or accolades in their name.

The most relevant and distinguishable roles in which method acting was apparent was in Heath Ledger’s Joker in Christopher Nolan’s The Dark Knight and Leonardo DiCaprio’s Hugh Glass in the 2015 survival drama The Revenant. While both actors performed within the guidelines of Stanislavski’s system, it was more than apparent that they also exceeded it, both in a  psychological and a physical manner. Impeccable in almost every aspect, Ledger made certain that his portrayal would be remembered for years to come.

Followed by an entire month of isolation, he transported himself in the psyche of the Joker and maintained a diary of his thoughts while crafting the eerie voice and chilling laugh. Reportedly, he ignored cast members upon their refusal to acknowledge him as the Joker, and snuck around the sets of the film in character on days off. While Ledger’s untimely demise affected his presence at the Academy Awards later that year, he was posthumously honored with Best Supporting Actor.

Leonardo DiCaprio, who has also been notorious for his ability to retain the persona of his characters both on and off screen, was only awarded with the Best Actor accolade in his most intensive method acting role yet in The Revenant, which once again established him as a leading actor in Hollywood after years of delivering outstanding performances without a single win. Following a similar routine of isolation and script analysis, DiCaprio elevated the magnitude of his performance to an entirely different level. Telling the story of a frontiersman betrayed and abandoned by a hunting team who kills his Native American son while he recovers from injuries sustained by a brutal bear attack, director Alejandro Iñárritu’s vision explained a grounded story of vengeance and human resolve with a man that had to crawl back miles to civilization to rest his son’s soul to peace. Moreover, it demanded a gritty performance that could only be attained by a capable method actor.

Given that the makers of The Revenant used a method of filmmaking and cinematography that relied only upon natural light, DiCaprio had to combat the frozen tundra of Canada with clothing made of wool, which resulted in him contracting pneumonia after his refusal to wear more protective layers in scenes that left  his clothes severely torn after the bear attack. Additionally, his depiction of a man struggling for a source of food was given with pure emotions, with his insistence to consume raw bison liver causing severe nausea.

As anticipated with the reception for the Stanislavski system, the principles of method acting have extended to countries such as the United Kingdom, where the universally acclaimed “Boy Who Lived” Daniel Radcliffe distinguished himself in an experimental role as the Israeli adventurer Yossi Ghinsberg, whose true story of survival in an uncharted part of the Amazon Jungle for three weeks in 1981 shocked many to their core. Relying upon one protein bar and a chicken breast a day, Radcliffe’s shocking diet thinned him to evolve himself for the role, yet the weight of his harrowing eyes told another story altogether. While he has confessed himself not to be a method actor, his manner of preparation was that which immersed himself in the core of script’s subject, proving to both audiences and critics that he is an out and out director’s actor.

Be it in Ledger’s palpable madness, DiCaprio’s sorrow and angst, or Radcliffe’s acute comprehension of pathos in a script, each actor presents the ability to achieve an impressive and diverse filmography, yet the appalling effects their techniques may pose to an artist have been condemned as too severe, and in many cases, another source to garner a better image from the media and profit from the audience. A cynical reason behind method acting’s increasing popularity, the notion offered by many disparagers has likened the technique of method acting to that of a marketing tool, in which performances may only be appreciated based on how intriguing stories are behind the scenes. Hollywood, like any film industry, is driven by a pursuit of profit through entertainment. Marketing may be a necessity, but Academy Award and Golden Globe winners do not necessarily obtain their merit by promotion. Rather, it is their ability to be consummate in their craft and sheer dedication that may outperform any word of mouth during an interview or an article from a reputed news source.

In its simplest form, acting is merely a form of expression, yet it is also a form of truth for the adept and skillful actor.  Method acting, while both a widely practiced and a disputed school of drama, refers to a performance that is genuinely organic- both in its conception, evolvement, and depiction. It requires an earnest collaboration from both the performer and the developing minds of the work to understand the direction of the narrative and its inhabitants, all while maintaining a mutual respect of one’s creative space. Only when an artist is left to interpretation may he truly explore the numerous shades of grey that is within. While it does not mandate one to subject themselves to any degree of pain or discomfort, it does require one to wilfully submit to an artistic place of liberation and expansion within to extract something honest and real. As Stanislavski urged actors:  “Create your own method. Don’t depend slavishly on mine. Make up something that will work for you! But keep breaking traditions, I beg you!”